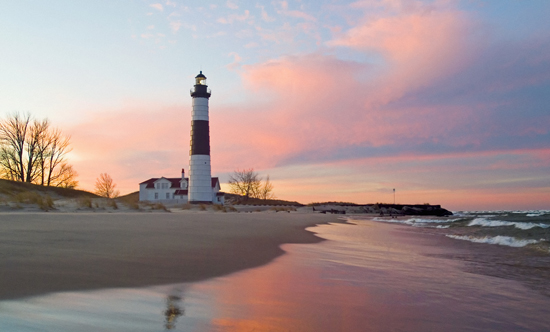 The black-and-white striped, 112 foot lighthouse at the Ludington State Park stands proudly on the shores of Lake Michigan and remains a testament to lighthouse keepers of the past. Big Sable Point Lighthouse was honored as 2013 Featured Lighthouse of the Year for the Great Lakes Lighthouse Festival.

The Sable Points Lighthouse Keepers Association is in the midst of a fund drive to repair the lighthouse. "Leave a Print in the Sand" hopes to raise $250,000 to make major repairs, including repair of rusted sections, painting the tower, replacing both the roof and more than 700 original bricks.

You can purchase a Trex board that will be used in the new walkway around Big Sable Point Lighthouse. Each engraved board costs $100 and allows 25 characters on one line. If you're interested in helping with this project, visit the SPLKA office in downtown Ludington's Center for the Arts, or go to splka.org. 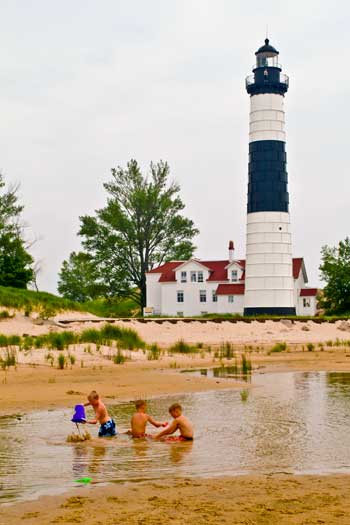 Photo by Todd and Brad Reed
The Sable Points Lighthouse Keepers Association maintains the Big Sable Point Lighthouse, north of Ludington State Park. The lighthouse is open for tours Tuesday-Sunday, 10am-5pm May 10-October 24, 2021. You can climb to the top, or visit the gift shop, located in the original Keeper's Quarters. Lighthouse in the Dunes Field Trips are available by registering in advance with Alan Wernette, State Park Naturalist, at (231) 843-9261. Or you can e-mail Alan at Wernettea@michigan.gov.

There is a $8 donation fee to climb the lighthouse tower; $5 for children 17 & under. On selected days through the summer, buses transport visitors from the park rangers house located just inside Ludington State Park to the lighthouse and back for an additional transportation fee. Buses are available from 12pm to 5pm on those days; the round-trip fee is $5 for adults and $2 for children 12 & under. Due to weather conditions and staffing, it may be wise to call ahead at (231) 845-7417, or visit www.splka.org for more information.

Standing on ground formerly known by French explorers as Grande Point au Sable, the Lighthouse Board recommended a beacon be placed in Ludington. In 1867, Big Sable Point Lighthouse was constructed, and on November 1 of that year, mariners as far as 19 miles out on the lake saw a constant white light for the first time.

Climate has not been kind to the lighthouse, and in early 1900, the tower had deteriorated so badly that cement was poured between the plates and brick. It was at this time that the black and white daymark was introduced. In 1949, Big Sable Point became the last Great Lakes light to be electrified, and automation of the light eliminated the need for a keeper, though the Coast Guard staffed the light until 1972. 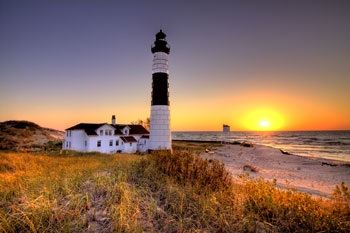 Photo by Craig Sterken
Erosion has always been a problem at Big Sable Point, and in 1943, a seawall was built to help control the problem. But because the light was unmanned, the virtually abandoned property deteriorated further. In 1987, the Big Sable Point Lighthouse Keepers Association was formed, guaranteeing the preservation of this historic landmark. Restoration work began on the seawall, the original Fresnel lens was replaced, the building exterior and tower were painted and floors were refinished.

The Big Sable Point Lighthouse is listed on both the state and national registers of historic places. It is one of the tallest in the state of Michigan at over 100 feet. From May-October, visitors can hike the 1.8 miles from the parking lot to the beach and climb the 130 steps to the top of the tower, which offers a spectacular view. The original keeper's quarters houses a gift shop, where you can pick up a memento of your visit. Thanks to the Lighthouse Keepers Association, Big Sable Point Lighthouse and three other area lighthouses will continue to beautify the coastline and allow people to enjoy their importance to our maritime history.

Follow US-10 west as it turns into Ludington Avenue, turn right onto M-116 and drive north up to the Ludington State Park. Walk 1.8 miles to reach the lighthouse.

More About the Ludington State Park...

Grand Traverse Light Station -- Located on the tip of the Leelanau Peninsula in Northern Michigan, The Grand Traverse Light was established in 1852.
Point Betsie Light Station -- Nestled in a dune just south of Sleeping Bear Dunes National Lakeshore, the tower stands 39 feet tall, but with the height of the dune it towers 52 feet above Lake Michigan.

Manitowoc North Breakwater - Walk out to the end of the pier to this Manitowoc lighthouse, and wave to the carferry S.S. Badger as the ship passes by.
Algoma North Pierhead - This lighthouse can be seen all along the Crescent Beach Boardwalk and is accessible via the pier if you want to venture closer.
Kewaunee Pierhead Lighthouse - Located in Kewaunee, Wisconsin...halfway between Sturgeon Bay and Manitowoc along Lake Michigan.